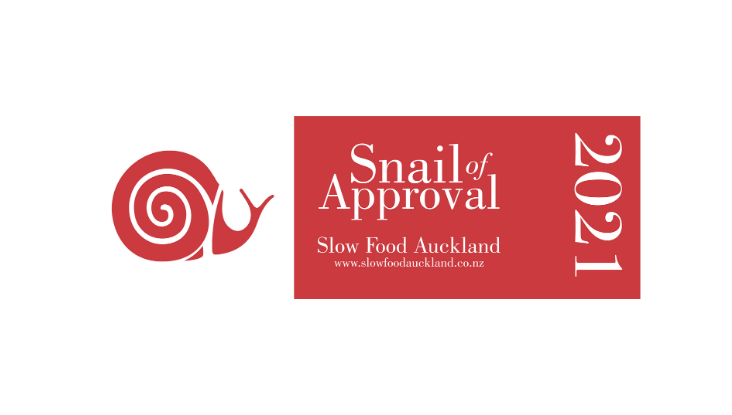 We are so excited to be launching the Slow Food Auckland Snail of Approval on November 17th – a New Zealand first! Check out our media release.

Fourteen Auckland region food businesses will become New Zealand’s first to be awarded the Slow Food “Snail of Approval”, at an event on Tuesday 17 November.

The Slow Food movement was founded in Italy in 1989 to prevent the disappearance of local food cultures and traditions, and combat people’s dwindling interest in the food they eat, where it comes from and how our food choices affect the world around us. It has since grown to more than 160 countries worldwide, including New Zealand.

The movement aims to change the world through food and celebrates the love of food cultures, rituals, and traditions.

Slow Food Auckland Committee Member Anutosh Cusack says the internationally recognised Snail of Approval programme promotes and celebrates locally grown and produced food that is good, clean and fair and the people who make it happen.

“By recognising their intent, passion and effort rather than perfection, the Snail of Approval is intended to inspire all types of food businesses to embrace Slow Food principles,” says Ms Cusack.

She notes that launching the Snail of Approval in Auckland is the first step to rolling it out in other regions across Aotearoa.

“It is an exciting development in our food culture. It will foster ongoing improvements in ethical, sustainable food business practice by connecting recipients with a community of like-minded businesses and foodie people.

“Many food-related businesses have been hammered by Covid lockdowns. The Snail of Approval will help to support thriving local economies by fairly rewarding those who earn their living from growing, making, and serving food,” she says.