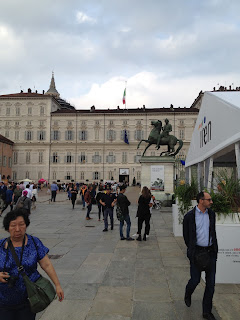 I attended the Slow Food conference (Terra Madre Salone del Gusto) in Turin, Italy from the 22nd till the 26th of September 2016. Over January I am going to post something each week that was key for me. It will speak of Italy, Turin, Slow Food, tastes, people and joy. It is educational. I hope you will enjoy.

Saving the Fertility of our Soil.
Monocultures, fertilizers and high-yield seeds have seen harvests triple, yet they have compromised the biodiversity and fertility of soils. Every year we lose 24 billion tons of fertile soil on a global scale, while 60% of our land is somewhat deteriorated. Impoverished and polluted soil cannot produce good food. Only a few countries have laws that protect the land: People4Soil has launched a campaign aiming to make soil protection mandatory by law.
This was the blurb of the Terra Madre forum that I excitedly bowled up to.
But first let me back up a little…
Saturday 24th September
In the late afternoon I made my way to the Royal Palace area again by tram as I had a blind date. I had arranged to meet an Italian gentleman from Umbria who was a university professor that specialises in olives. He had visited New Zealand previously and met my NZ Slow Food team and was keen to meet more of us. Sue, Brian and I all met in the square. 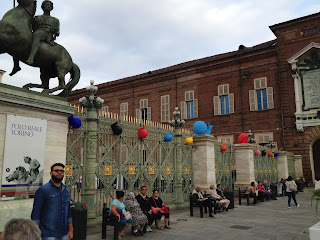 What a delight to meet our new friend. Saverio took us to the Perugia stand that he was manning and we had our own private tasting of the delicious Vin Santo and Salami of his area. He explained the growing conditions and special character of the grapes and the process of making the Vin Santo. We also nibbled delicious tiny cookies put together with fruit preserves. All the while Saverio talked to us, hands would reach in and around us trying to snatch the samples we had been offered. 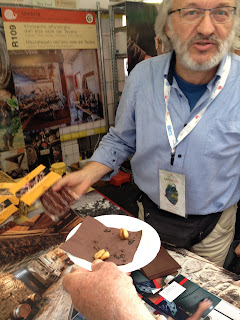 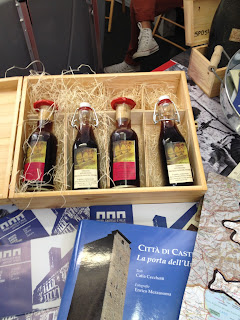 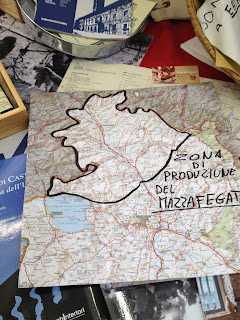 It’s a strange environment attending this for me and watching people’s behaviour. Mostly I sampled nothing. I do recall trying a piece of dried fruit at a Sicilian stall but other than the experience with Saverio, I taste tested nothing. Even though I was at a Slow Food conference with literally thousands of stalls with samples of food! The truth is that people flocked around each stall jostling and clamouring to get to the front and snatch their morsel. They often seemed to have no interest in the producer and what the producer wanted to share with them. I’m not even sure that many of the attendees were interested in Slow Food and what it means. I suspect many thousands here were locals enjoying the days outing. It wasn’t pleasant for me to participate in that frenzy but I did buy food, arancini from the Sicilian area, farinata (chick pea based unleavened flatbread and a delicious takeaway panino with grilled aubergine, peppers and courgettes. Yum. And only 3.50euro.
So after our educational visit to Perugia, (just the stall),  Saverio and I meandered around making our way to a famous café for an institution here that has spread across Italy and the world. The aperitivo some say was born in Turin, …The aperitivo has an interesting history, and despite its popularity across different areas of Italy it is very much associated with Turin. Although some anthropologists claim the idea of a pre-dinner drink stretches back as far as the ancient Egyptians, the creator of the modern day aperitivo is generally credited as being Antonio Benedetto Carpano.
Carpano is known as the inventor of Vermouth which he first made in Turin in 1786 by infusing Moscato white wine with herbs and spices. Apparently the drink was considered perfect for opening the stomach before a good meal. http://www.thelocal.it/20150623/a-beginners-guide-to-aperitivo-in-italy. 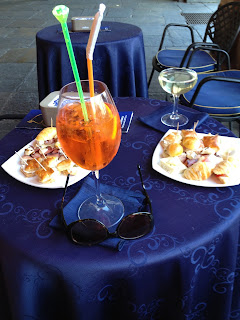 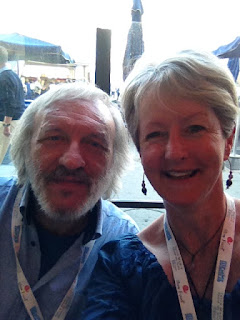 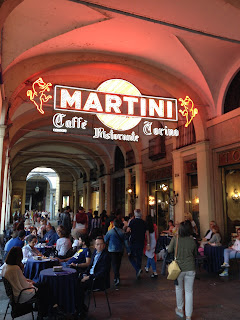 Sunday 25thSeptember.
I woke early around 6am and went walking. It was a beautiful morning. I wanted to get a look at the Mole Antonelliana but had not had a chance until now. It is a stunning building having been conceived of originally as a Jewish synagogue and completed in 1889. But I was way too early for it to be open to take the elevator up to the top for the view. I wasn’t too early for the gypsys though and I found myself shrieking at them this morning. I shocked them and shocked myself. I’m definitely getting a bit tired, normally they don’t bother me. 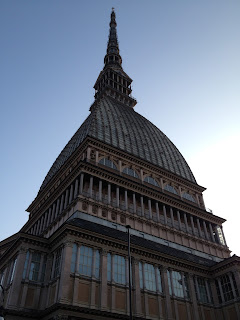 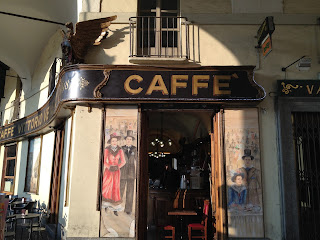 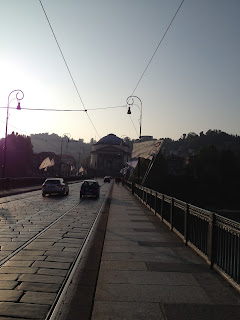 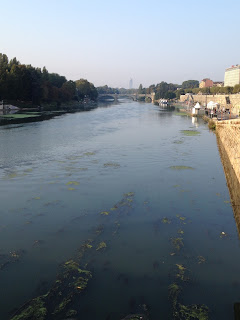 I walked on through the beautiful Piazza Vittorio Veneto and over the Ponte with a wonderful view of the Chiesa Della Gran Madre Di Dio. I looped back to the city side by the Valentino Park. It looked like it was going to be a really busy day. I followed my nose in the park wandering away from the Slow Food activity into the Borgo Medieval.
In 1884 for the Turin Expo a faithful copy of a 15thcentury castle was built as an educational and promotional setting. It stands today with a series of shops selling medieval costumes, weapons and maps, jewellery and knick knacks. It also houses cafes and restaurants that look out upon the river. I had a lovely time enjoying the shade and few tourists after the frenetic conference areas. 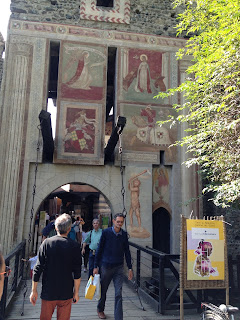 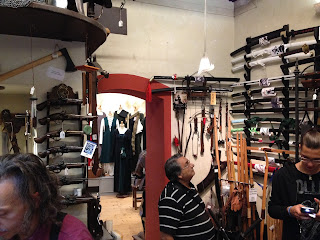 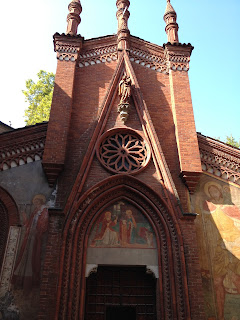 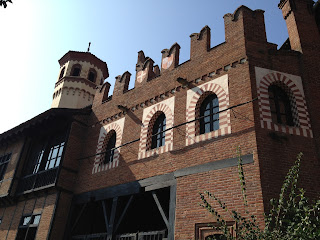 Then it was time for my soil forum so I hurried back to the esposizione at Torino University for a seat. Expecting a repeat of the overcrowded slow travel forum, I came early and positioned myself at the side however this was attended by maybe a quarter of the crowd size.

Unfortunately, I am ashamed to say I did not document the speaker’s names at this forum. Below is fairly brief note form of what I learnt:
The first speaker was from France and an expert on soil having written a book about the topic. He talked about how European soils are 10,000 years old, and therefore not renewable. They carry the history of the relationship between man and the earth. The key problems as he sees them are that:
– the soil is left fallow and naked through winter in Europe exposing it to the elements with the subsequent oxidation and the effects on microorganisms, exposure to winds and weather and the losses associated with these,
-we use deep ploughing practices which have the same outcomes,
-the use of mineral fertilisers produces bloated attractive looking produce but the roots are atrophied not having developed and have to search for nutrient so the plants are weak and not healthy.
-and finally, the sealing or water proofing of the ground under urbanized areas and the impact this has on soil and how much is available to us.
The next speaker pointed out that last December the 5th was World Soil day; 2015 was year of the soil, and that we are currently in the decade of the soil as proclaimed by the International union of soil sciences!

The next speaker was a soil consultant having been a Pedologist his entire career, Pedology (from Greek: πέδον, pedon, “soil”; and λόγος, logos, “study”) is the study of soils in their natural environment. It is one of two main branches of soil science, the other being edaphology. https://en.wikipedia.org/wiki/Pedology_(soil_study).
He discussed the loss of quality in the soils we have and the way that it is measured and the rules and measurements to assess it. He believes soil should be certified.
Apparently there are 500,000 microorganisms in every spoonful of soil; it is the most richly diverse ecological system on Earth.
He also mentioned the Terra Fuochi southern Italian polluted soil. On researching this reference, a wiki led me to the sad tale of what he is talking about. In an area north of Naples near Caserta toxic waste from near Venice and northern Italy was dumped and spread over agricultural land by local camorra. Also fires were lit to burn an estimated 30 000 tons of copper wiring and other industrial waste which has badly polluted the soil with among other things, dioxins and PCBs. All of this has led to unusually high cancer rates in the local population. It is referred to as the greatest mass poisoning in Italian history and is fairly recent. https://en.wikipedia.org/wiki/Triangle_of_death_(Italy).
Slow food youth in the Netherlands have undertaken a project to draw people’s attention to the need for soil conservation and protection by making it sexy. Good on them!
And lastly, check out People4soil, an initiative launched last month to run for 12 months in an effort to pressure Europe into legislating to protect soil. Here is a short sharp clip of their project: https://www.facebook.com/people4soil/videos/1082169281801372/.
I so enjoyed this talk. It was comfortable and I felt surrounded by interesting, intelligent people who deeply care about our Earth. I was inspired and made a pact with myself. When I return to this conference in 2018 I will not be living my life the same way I do now; unaligned beliefs and behaviour; in employment selling products that I am not always comfortable about, not truly living my truth. 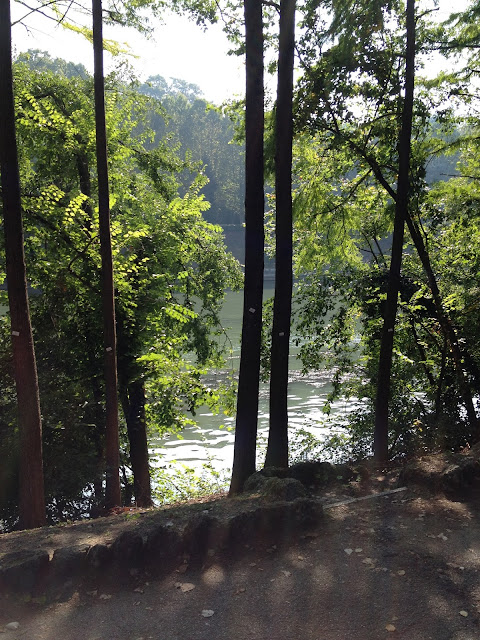 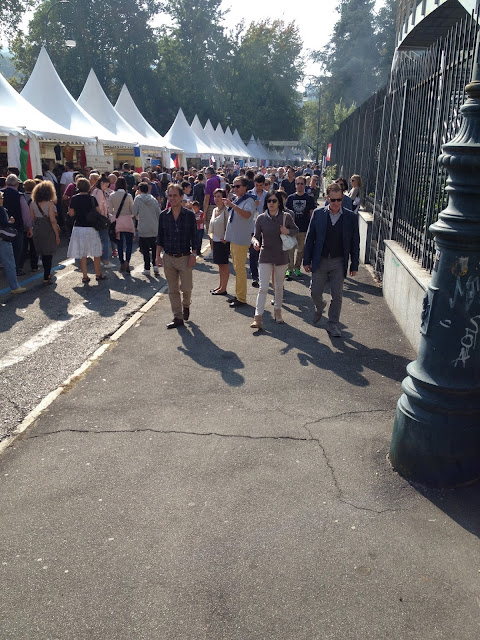